An Opinion by: Marie R. Chihil 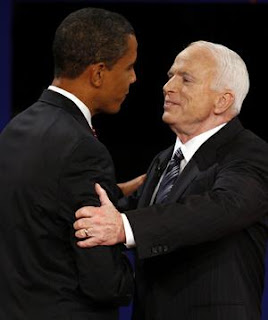 The following is a letter written to the McCain Palin ecampaign@gop.com when I was sent a request to host a Super Saturday. I received the request the day after the final Presidential debate of 2008.
Gop,
On October 15, 2008, the American people were expected to listen to the United States Presidential Candidates views on how they planned to lead this country for the next four years. The following comments, right or wrong, are from an eligible American voter, who cares about the success of The United States of America and it's people.
I was very disappointed in McCain's Performance on the last debate. Neither candidate presented themselves as viable candidates for the United States Presidency.
1. Mc Cain chastised Obama for hanging out with terrorists, then supported NAFTA, referring to the agreement as if it were a group of people we should all get to know rather than a contract of trade. Perhaps Mc Cain Is trading people.