God Father Bush, his Son George, and the Holy Spirit

These windows were inspired when I was asked by a friend what I thought God looked like..My first thought was God was a burning Bush. Recognizing the humor in a burning Bush and George Bush Sr and Jr..I wanted to see what the language would show me about the name..

This is an excellent example of how the language leads the reader.

1. As the topic referred to God..I decided to use Bible Grammar. "The last shall be first" Referring to taking the last letter and placing that in front.

2. In The United States we are taught that The Gutenberg Bible was the first bible in print.. Gutenberg is a German so I read the text with a German alphabet sounds.

There are two types of B's in the German alphabet.

As the English typewriter has a B rather than an ß on the key board..the ess sound should be considered a possibility when reading the letter B with German sounds.

Sounding the word out phonetically

Said quickly hsus sounds like the word JESUS in Spanish

I had my God connection!!! WOW

Perhaps Bush Sr was God the father..or the God Father

I began to wonder how SR and JR read Phonetically:

Together the words read Surger..a Sewing Machine? A Surger is a machine using four threads to create one seam. I was not comprehending how a Surger fit together in a God Father puzzle. The book, "The Three Musketeers" came to mind. In this book the title claimed there were three Musketeers, but there were actually four. The forth being Dartanian.

Was the surger a clue? Could there be four Gods in the Bush head.. a box rather than a triangle. I was stumped. Like any language, the more i learned the more I realized how little I knew.

I decided to read the the words JR and SR forward and backwards phonetically to see if the translation gave a broader enlightenment.

The word Serious seemed self explanatory and the word Cerus in Greek Mythology: Demeter (Ceres)
Demeter was the Greek goddess of corn (and grains generally). The granddaughter of Gaia and sister of Zeus, Demeter was responsible for maintaining the fertility of the land that allowed crops to grow and communities to survive. Her role in sustaining the life of vegetation as a whole meant that she was regarded as critical to the existence of all life on earth.

A WOMAN in charge of vegetation !!!
I knew that genetic engineering had escalated since the Bushes came into office but a woman!!! George Bush SR was man!!! Perhaps Bush SR was a
Sir Cerus..A Mr. Woman
BARBARA BUSH

JRJ
(George)
The reasoning and thoughts behind window number 1. 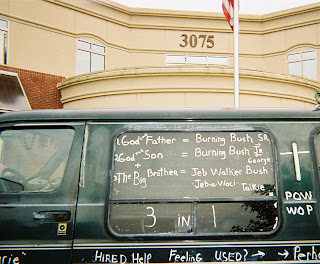 Jabberwocky" is a poem of nonsense verse written by Lewis Carroll, originally featured as a part of his novel Through the Looking-Glass, and What Alice Found There (1871). It is often considered to be the greatest nonsense poem written in the English language.[1] The poem is sometimes used in primary schools to teach students about the use of portmanteau and nonsense words in poetry, as well as use of nouns and verbs.[2]

I placed 3 /1 on Car Telling Windows to refer to the traditional belief in the Christian God Trinity Philosophy. I thought the four in one might to advanced for the Car Telling Windows readers without an explanation.
What the hell.. The Four Musketeers Philosophy..
Where there is three, there are actually Four
Four Gods Surged together?
George SR, George Jr, Jeb Walker, and Barbara Bush
The language was pulling together lots of information..History, literature, and movies, famous people, seemed important to remember when comprehending the language. If my comprehension or translation of the words were accurate or partially accurate, I was beginning to feel baffooned and uneducated. The American Presidency seemed a Jabberwocky; A nonsensical poem. Had the United States Government, and it's security leaders betrayed the American Public..or were it's leaders also puppets.. to whom?

Sung to the tune of Queens
"We Are The Champions"

Over -n-Over, Offer-n-Offer, A- gain
(V pronounced as the letter F in German)

I had been told by an Army Colonel, that it was not common knowledge, but War was big business for the United States Government. For the RIGHT PRICE, The American Military was for hire. He also stated , that the American people were kept in difficult situations to make them tough. The countries who hired the American military for protection, wanted to be assured the people they were hiring would be physically and emotionally able to fight.
ARE television shows advertisements that show the tenacity of the American people?
American Gladiators For Sale 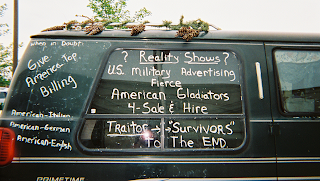 I will end with a question for the reader to ponder..
In the Television show Dallas...
WHO KILLED JR....
Is George Jr. a dead spirit?
Posted by cartellingwindows.com at 12:23 PM

And God gave his only begotten son, so that whoever believeth in him shall have eternal life...
Sounds like the daddy done it.

or the daddy could have been a mommy.